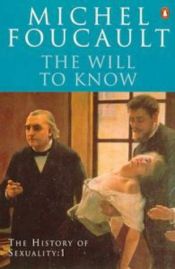 The History of Sexuality is a three-volume study of sexuality in the western world by the French historian and philosopher Michel Foucault. The first volume, The Will to Knowledge, was first published in 1976 by Éditions Gallimard, before being translated into English by Robert Hurley and published by Allen Lane in 1978. It was followed by The Use of Pleasure, and The Care of the Self, both published in 1984.
In Volume I, Foucault explores the "repressive hypothesis", the idea that western society suppressed sexuality from the 17th to the mid-20th century: he argues that this hypothesis is an illusion, and that in actuality, discourse on sexuality proliferated during this period. He goes on to argue that at this time, experts began to examine sexuality in a scientific manner, classifying different types of sexuality and encouraging people to confess their sexual feelings and actions, all in the desire to learn the "truth" of sex.
Foucault was interested in the creation of the subject and how the individual was constituted.

The Society of the Spectacle

The Making of the English Working Class