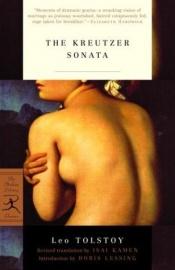 When Marshal of the Nobility Pozdnyshev suspects his wife of having an affair with her music partner, his jealousy consumes him and drives him to murder. Controversial upon publication in 1890, The Kreutzer Sonata illuminates Tolstoy’s then-feverish Christian ideals, his conflicts with lust and the hypocrisies of nineteenth-century marriage, and his thinking on the role of art and music in society.

In her Introduction, Doris Lessing shows how relevant The Kreutzer Sonata is to our understanding of Tolstoy the artist, as well as to feminism and literature. This Modern Library Paperback Classic also contains Tolstoy’s Sequel to the Kruetzer Sonata.