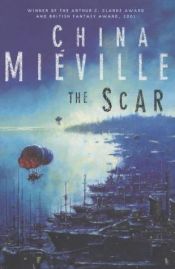 The Scar is the second Bas-Lag novel, and third overall, written by China Miéville, a self-described "weird fiction" writer from London, England. The Scar won the 2003 British Fantasy Award and was shortlisted for the 2003 Arthur C. Clarke Award. Miéville won both these awards in 2001 for his previous novel, Perdido Street Station, and won the Arthur C. Clarke Award again in 2005 for Iron Council.
The Scar was additionally nominated for the Philip K. Dick Award in 2002 and the Hugo Award for Best Novel in 2003.
Although set in the same universe as Perdido Street Station, The Scar is not a sequel to that novel, though it is set directly after the events described in Perdido Street Station.

The Darkness That Comes Before