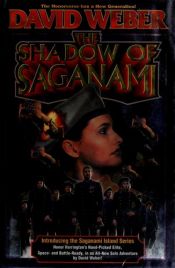 The Shadow of Saganami is a science fiction novel by American writer David Weber, published in 2004. Set in the Honorverse, it has been billed as the first in the Saganami Island series, spun off from the main Honor Harrington series. The book debuted at #16 on the New York Times hardcover fiction best seller list.
It features Honor herself only in a cameo role: other characters from the novels and several short stories take centre stage. These include Helen Zilwicki, introduced in From the Highlands, and Abigail Hearns, introduced in Ashes of Victory and also seen in The Service of the Sword.

The Service of the Sword