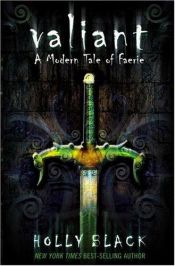 Valiant: A Modern Tale of Faerie

Valiant: A Modern Tale of Faerie, is a young-adult urban fantasy novel by Holly Black. It was published in 2005 by Simon & Schuster Books for Young Readers, who recommended it for ages "14 up". Valiant is a sequel to Black's debut novel Tithe: A Modern Faerie Tale, and the second in a trilogy that is sometimes called [A] Modern Tale of Faerie.
Where Tithe is set mainly on the Jersey Shore, Valiant is set in New York City. The two novels share a major premise, or fictional universe, but Valiant also works as a stand-alone story. According to online excerpts from a 2006 Locus interview and short biography of Black, "Valiant is another contemporary fantasy loosely related to Tithe, and Ironside, a direct sequel to Tithe, is forthcoming."
Valiant won the inaugural Andre Norton Award as the year's best U.S. science fiction or fantasy for young adults as selected by vote of the Science Fiction and Fantasy Writers of America. It was also a finalist for the annual Mythopoeic Fantasy Award in children's literature, as Tithe had been.

Book of a Thousand Days