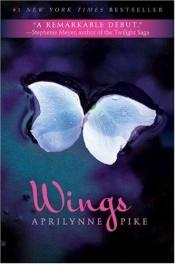 Wings is the debut, young-adult faerie novel by author Aprilynne Pike. It is the first of four books about a fifteen-year-old girl who discovers she is a faerie sent among humans to guard the gateway to Avalon.
Wings was released in the US, UK, & Canada on May 5, 2009, and became a New York Times Best Seller in its first week of sales, reaching #1 on the Children's Chapter Books list in its second week. It was also a Publishers Weekly Bestseller and made Pike the best-selling non-celebrity children's author to debut in 2009. Wings went on to become an international bestseller in 2010.
The sequel to Wings, Spells, was released on May 4, 2010. The third book in the series, Illusions, was released May 3, 2011. The series concludes with Destined which was released on May 1, 2012.

Valiant: A Modern Tale of Faerie