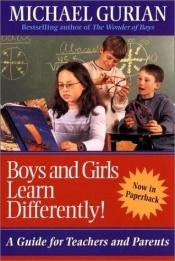 Boys and Girls Learn Differently!: A Guide for Teachers and Parents

At last, we have the scientific evidence that documents the many biological gender differences that influence learning. For instance, girls talk sooner, develop better vocabularies, read better, and have better fine motor skills. Boys, on the other hand, have better auditory memory, are better at three-dimensional reasoning, are more prone to explore, and achieve greater abstract design ability after puberty.

In this profoundly significant book, author Michael Gurian synthesizes the current knowledge and clearly demonstrates how this distinction in hard-wiring and socialized gender differences affects how boys and girls learn. Gurian presents a new way to educate our children based on brain science, neurological development, and chemical and hormonal disparities. The innovations presented in this book were applied in the classroom and proven successful, with dramatic improvements in test scores, during a two-year study that Gurian and his colleagues conducted in six Missouri school districts.

Above All, Be Kind

There Are No Shortcuts

Working on the Work : An Action Plan for Teachers, …