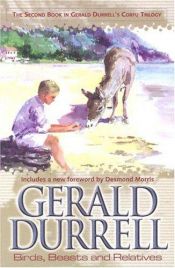 Birds, Beasts, and Relatives is the second volume of the autobiographical Corfu Trilogy by naturalist Gerald Durrell. The trilogy describes his childhood spent on the Greek island of Corfu between 1935 and 1939.
Like its predecessor, the more famous My Family and Other Animals, Durrell intersperses humorous family anecdotes with rich descriptions of the fauna and flora of Corfu, and of his own formative education in natural history. The book was published in 1969 and followed the huge success of the first Corfu book; like his other books, Durrell wrote Birds, Beasts and Relatives primarily to raise money for his animal collecting expeditions.

Moab Is My Washpot