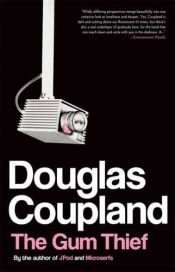 The Gum Thief is Canadian author Douglas Coupland's twelfth novel. It was published on September 25, 2007, by Random House Canada in Canada and Bloomsbury Publishing in the United States.
An epistolary novel, The Gum Thief is written as a collection of journal entries, notes, and letters written by various characters. Among these are regular installments of the characters in Roger's novella, titled Glove Pond.
A special boxed edition was also released including a special hardback edition signed by Coupland, as well as a hardback copy of the Glove Pond novella by "Roger Thorpe." The jacket for Glove Pond features a pull-quote written by Douglas Coupland.

This book, after a lot of books recently has reinvigorated my love of reading. I couldn't put it down. Highly recommend.