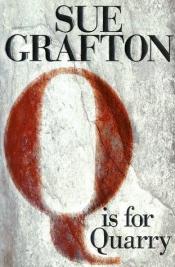 Q Is for Quarry

"Q" Is for Quarry is the 17th novel in Sue Grafton's "Alphabet" series of mystery novels and features Kinsey Millhone, a private eye based in Santa Teresa, California.
Though the book is a work of fiction, it is based on an unsolved homicide that occurred in Santa Barbara County, California in August 1969. A Jane Doe victim had been dumped near a quarry in Lompoc, California, and never identified. At a dinner party, Sue Grafton had a conversation with Dr. Robert Failing, who mentioned the case. He is the forensic pathologist who worked for the Coroner's Office which had retained her maxilla and mandible. The victim was never identified, and never associated with any known missing person's case. It was hoped that the additional publicity generated by the book, would help turn up additional leads, but so far, unsuccessfully. The Santa Barbara County Sheriff's Office is still hoping to find additional leads, and has the images of the facial reconstruction on their page.

O is for Outlaw

P Is for Peril