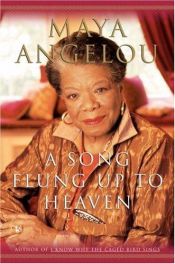 A Song Flung Up To Heaven

A Song Flung Up to Heaven is the sixth book in author Maya Angelou's series of autobiographies. Set between 1965 and 1968, it begins where Angelou's previous book All God's Children Need Traveling Shoes ends, with Angelou's trip from Accra, Ghana, where she had lived for the past four years, back to the United States. Two "calamitous events" frame the beginning and end of the book—the assassinations of Malcolm X and Martin Luther King, Jr. Angelou describes how she dealt with these events and the sweeping changes in both the country and in her personal life, and how she coped with her return home. The book ends with Angelou at "the threshold of her literary career", writing the opening lines to her first autobiography, I Know Why the Caged Bird Sings.
As she had begun to do in Caged Bird, and continued throughout her series, Angelou upheld the long tradition of African-American autobiography. At the same time she made a deliberate attempt to challenge the usual structure of the autobiography by critiquing, changing, and expanding the genre. Most reviewers agreed that the book was made up of a series of vignettes.

When I Was Puerto Rican

Killing Yourself to Live: 85% of a True Story