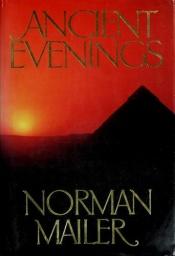 Ancient Evenings is a novel by American author Norman Mailer. It deals with the lives of two protagonists, one young, one old, in a very alien Ancient Egypt marked by journeys by the dead, reincarnation, and violent and hyper-sexual gods and mortals in a complex combination of historical fiction, allegory, poetic flight, confession and spiritual meditation.
Most but not all of the novel takes place on one long evening in 1123 or 1122 BCE, during which the characters tell stories of the past. The majority of the book concerns the reign of Ramesses II, approximately 150 years before the night of the narrative; the Battle of Kadesh is in turn the central event of this sub-narrative.
The novel had an extremely mixed critical reception marked by a preponderance of negative reviews.
William S. Burroughs acknowledged "Norman Mailer and his Ancient Evenings, for inspiration" in his 1987 novel The Western Lands.

Captains and the Kings