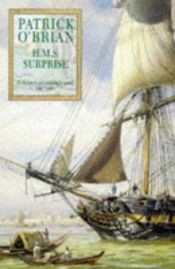 HMS Surprise is the third historical novel in the Aubrey-Maturin series by Patrick O'Brian, first published in 1973. The series follows the partnership of Captain Jack Aubrey and the naval surgeon Stephen Maturin during the wars against Napoleon's France.
Maturin is tortured gathering intelligence. On HMS Surprise, Aubrey and Maturin make a long voyage to bring an ambassador to Southeast Asia, rounding the southern tip of Africa.
Some reviewers found the novel with "superb depictions of life", yet too full of nautical detail, while others found that detail part of the author's erudition and not in the way of the plot. The author showed "capacity for creating another completely believable world", while another reviewer said the novel is "stretching its genre [naval adventure] but never escaping it."