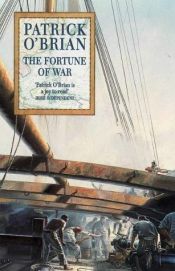 The Fortune of War is the sixth historical novel n the Aubrey-Maturin series by British author Patrick O'Brian, first published in 1979. It is set during the War of 1812.
HMS Leopard made its way to Botany Bay, left its prisoners, and sailed to Pulo Batang where the ship was declared unfit. Captain Aubrey and some of his followers are put aboard La Flèche packet to sail home for a new commission. Fire ends the months of sweet sailing and brings them into the new war.
The Fortune of War contains lightly fictionalized accounts of two sea battles in the War of 1812.