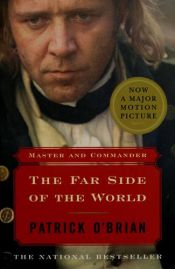 The Far Side of the World is the tenth historical novel in the Aubrey-Maturin series by Patrick O'Brian, first published in 1984. The story is set during the Napoleonic Wars and the War of 1812.
In Gibraltar, Captain Aubrey receives another mission, to sail HMS Surprise to protect British whalers in the Pacific Ocean from USS Norfolk. Dr Maturin had great success destroying the French intelligence network in Malta, but has not yet identified the high-level men who got away. Unaware, he sends the letter to his own wife explaining his protection of the Navy wife via that very villain. The Pacific Ocean is full of wonders, and prizes, once the Jonah is off the ship.

Blue at the Mizzen