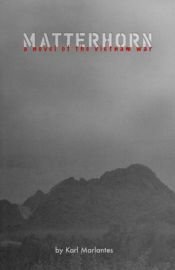 Matterhorn: A Novel of the Vietnam War is a novel by American author and decorated Marine Karl Marlantes. It was first published by El Leon Literary Arts in 2009 and re-issued as a major publication of Atlantic Monthly Press on March 23, 2010.
Marlantes is a graduate of Yale University and a Rhodes Scholar. He was also a highly decorated Marine who served in Vietnam. He was awarded the Navy Cross, the Bronze Star, two Navy Commendation Medals for valor, two Purple Hearts, and ten Air Medals. He spent 35 years working on the novel, which was rejected for publication numerous times.

The World at Night