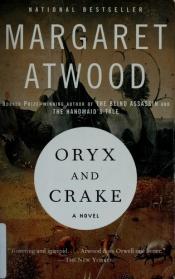 Oryx and Crake is a novel by the Canadian author Margaret Atwood. She has described the novel as speculative fiction and "adventure romance" rather than science fiction because it does not deal with "things that have not been invented yet" and goes beyond the realism she associates with the novel form. Oryx and Crake was first published by McClelland and Stewart in 2003. It was shortlisted for the Man Booker Prize for Fiction that same year, and for the 2004 Orange Prize for Fiction.
A television adaptation of Oryx and Crake and its follow-up novels The Year of the Flood and MaddAddam is being developed for HBO by Darren Aronofsky under the title of MaddAddam.

Planet of the Apes