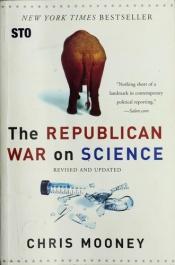 The Republican War on Science is a 2005 book by Chris C. Mooney, an American journalist who focuses on the politics of science policy. In the book, Mooney discusses the Republican Party leadership's stance on science, and in particular that of the George W. Bush administration, with regard to issues such as global warming, the creation–evolution controversy, bioethics, alternative medicine, pollution, separation of church and state, and the government funding of education, research, and environmental protection. The book argues that the administration regularly distorted and/or suppressed scientific research to further its own political aims.
The book was reviewed in Science and Nature Medicine as well as the popular press. It was featured on the cover of The New York Times Book Review and selected as an "Editors' Choice" by The New York Times which described it as, "A frankly polemical survey of scientific findings and procedures in collision with political operations."
Filmmaker Morgan Spurlock optioned the rights for the book to create a documentary film, but in 2008 announced that he had released the option.

The Party's Over: Oil, War And The Fate Of Industri …

Power Down: Options and Actions for a Post-Carbon W …