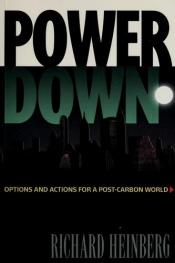 Power Down: Options and Actions for a Post-Carbon World

Power Down: Options and Actions for a Post-Carbon World is a 2004 book by Richard Heinberg in which Heinberg discusses peak oil and its attendant implications for the global economy. Due to the dependence of industrialized society on cheap and readily available petroleum, Heinberg argues that the post-peak period of global history is likely to be characterized by social and economic turmoil, disruption of trade, declining standard of living, and warfare.
Heinberg outlines four possible strategies nations could employ to respond to the economic challenges associated with declining oil production:
Last One Standing: Global competition for remaining resources
Powerdown: Global cooperation in reducing energy usage, conservation, resource management, and reducing population
Denial: Waiting, and hoping that some unforeseen element will solve the problem
Building Lifeboats: Preparing local areas to be sustainable in the event that the global economic project collapses
Heinberg fleshes out each of these strategies in detail and describes the current political and economic environment in terms of these elements.

The Party's Over: Oil, War And The Fate Of Industri …