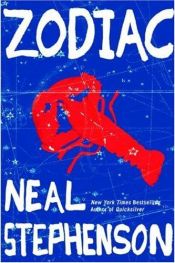 Zodiac: An Eco-Thriller is a novel by American writer Neal Stephenson. His second novel, it tells the story of an environmentalist, Sangamon Taylor, uncovering a conspiracy involving industrialist polluters in Boston Harbor. The "Zodiac" of the title refers to the brand of inflatable motor boats the hero uses to get around the city efficiently. His opponents attempt to frame him as an ecoterrorist.
The protagonist is inspired by environmental chemist Marco Kaltofen. Taylor is a recreational user of nitrous oxide, justifying his choice of drug by the eponymous Sangamon's principle: "the simpler the molecule, the better the drug".
In the novel, Taylor is a chemist working for GEE, a fictional environmental activism group which stages both protests and direct actions plugging toxic waste pipes. Taylor becomes involved with Basco Industries, a fictional corporation which produced Agent Orange and is a major supplier of organic chlorine compounds. Basco experiments with genetic engineering to develop chemical producing microbes, driving Taylor's efforts to expose their crimes and preserve Boston Harbor.