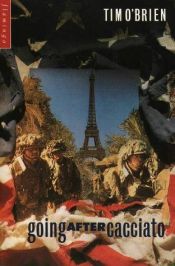 Going After Cacciato is a war novel written by Tim O'Brien and first published by Delacorte Press in 1978. It won the U.S. National Book Award for Fiction. However, Tim O'Brien himself says that "Going After Cacciato is called a war novel. It is not. It is a peace novel."
This complex novel is set during the Vietnam War and is told from the third person limited point of view of the protagonist, Paul Berlin. The story traces the events that ensue after Cacciato, a member of Berlin's squad, decides to go AWOL by walking from Vietnam to France, through Asia. Cacciato means "hunted"/"caught" in Italian.