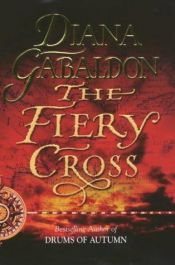 The Fiery Cross is the fifth book in the Outlander series of novels by Diana Gabaldon. Centered on time travelling 20th-century nurse Claire Randall and her 18th-century Scottish Highland warrior husband Jamie Fraser, the books contain elements of historical fiction, romance, adventure and science fiction/fantasy.
Claire, the heroine of Outlander, figures in The Fiery Cross as a reluctant oracle, and wife to Jamie Fraser, her 18th-century partner, and faces the politics and turmoil of the forthcoming American Revolution. As the preceding novel, Drums of Autumn, concluded with Jamie Fraser and his wife Claire helping their daughter and new son-in-law, from the 20th century, settle into life on Fraser's Ridge, The Fiery Cross picks up the storyline exactly where it was left - with Brianna Ellen Randall Fraser and Roger Mackenzie about to make their nuptials official and baptise their son Jeremiah. With the American Revolution only a few years away and unrest brewing, Jamie is called to form a militia to put down the beginnings of rebellion in North Carolina, and risk his life for a king he knows he must betray - and soon.

A Breath of Snow and Ashes